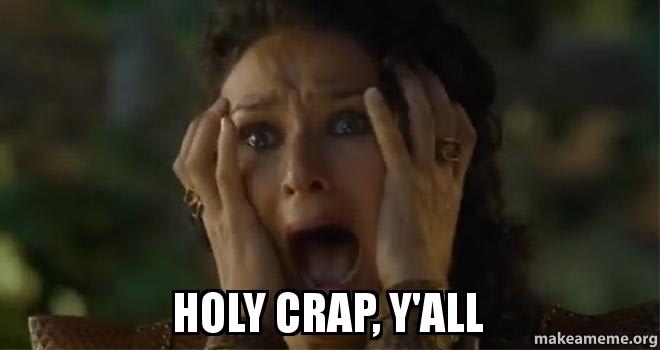 Are you not entertained? Or at least traumatized? Maybe both? “Game of Thrones” has 10 episodes per season and the penultimate episode, Episode 9, is always a doozy. Season 5’s Episode 9, “The Dance of Dragons,” continued that tradition.

Last week’s “Hardhome” was an epic masterpiece, and it was hard to see how Episode 9 could even match it. Well, if you want to beat ice, you’d better bring fire — so how ’bout that dragon fire? Daenerys Targaryen ended “The Dance of Dragons” by riding the back of her biggest (but still kinda small?) dragon, Drogon, leaving her friends stuck in the fighting pit. See ya, guys! 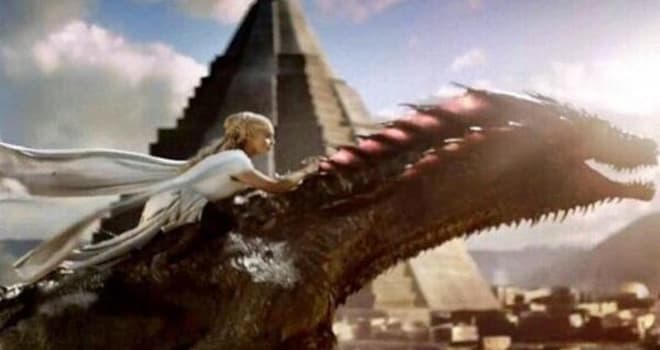 That sequence was from the books, and yet had some serious changes (sorry for blaming you for everything, Hizdahr) and the rest of Episode 9 included mostly new stuff that broke our hearts. Shireen. Sweet Shireen. One of the only characters on “Game of Thrones” that was completely innocent and completely likable is now gone, getting a Mance Rayder death so brutal even her cold-hearted mother wanted to stop it. Fire cannot kill a dragon, but it can kill a terrified child screaming for mercy. Just FYI.

This week Ellaria Sand said it was no wonder that Prince Doran Martell couldn’t walk, since he had no spine, but Stannis Baratheon was the truly weak one. And here we were, almost liking that d-bag after his sweet speech to his daughter earlier this season.

Pieces of this episode were epic in scale, but other parts were just OK or just place-setting for major events in the final episode of Season 5.

Down in Braavos, Arya Stark seems prepared to cross a name off her list: Meryn “Pedophile!” Trant. This is not something her new alter ego Lana would do, so what will happen if she does kill him in the finale and Jaqen H’ghar finds out? That was not in the most recent book, “A Dance with Dragons,” but it’s a twist on an Arya chapter coming in the next book, “The Winds of Winter.” Over at The Wall, Jon Snow is also in a tough spot, since his brothers in the Night’s Watch are not happy that he brought back so many wildlings. And Dorne. Sorry to say it, but Dorne is just boring. It has one episode left to justify its existence, and there won’t be much time, since we have to see Cersei’s penance, and find out what happens next with Dany and Jon.

Read on for a recap of Episode 9:

Opening credits: We heard to King’s Landing, Winterfell, The Wall, Braavos, Meereen, and Dorne. Almost all of the locations this week. 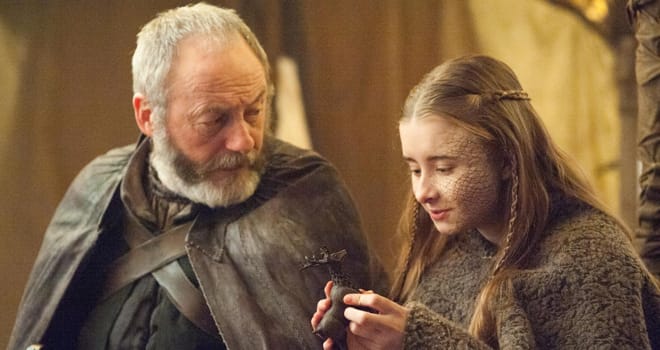 STANNIS’ CAMP
The night was dark and full of terrors in the camps of Stannis Baratheon’s soldiers. Melisandre came out of her tent to see flames everywhere, including a horse on fire. Davos talked about a band of 20 men — Ramsay Bolton’s — riding into camp. So Ramsay’s plan worked. Stannis refused to turn back. He said the dead horses should be butchered for meat and he went off to make a tough call.

Stannis told Davos he was being sent back to Castle Black for more supplies. He wanted Davos out of the way. Davos said the Hand never abandons the king, he can send someone else. Davos, still trying, asked if Shireen could accompany him. Stannis: “My family stays with me.” Chilling. Davos went to visit Shireen and she talked about “The Dance of Dragons” story. They had a good laugh about Ser Byron Swann getting toasted, Shireen got a gift, and Davos said goodbye to Shireen. Foreshadowing. Davos should ditch Stannis and join Team Dany. Give her all of Westeros’s top advisors. Stannis is the new Mad King. Davos deserves better. 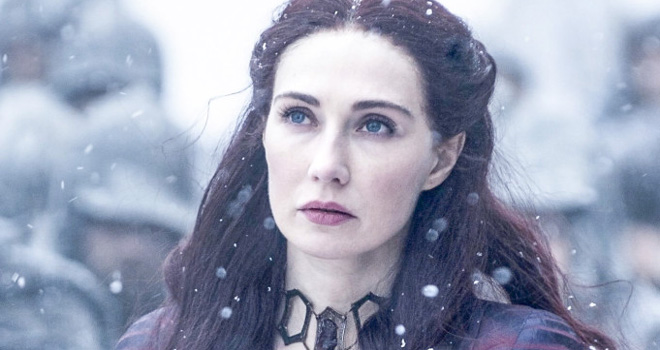 Later, Shireen told her father about “The Dance of Dragons.” If she had to choose between the rulers back then, who would she have chosen? She wouldn’t choose, but Stannis — clearly talking about himself — said sometimes the world forces your hand to choose. Shireen volunteered to help her father, and he said there is a way she could help him. She’s so cute and trusting. Don’t hurt her! Stannis: “Forgive me.” Uh oh. They led her through the snow to Melisandre, who was waiting — and Shireen was tied up to be burned. Poor Shireen screamed for her life, she screamed to her mother and father. It was brutal and her mother finally stepped up to try to save her, but it was too late. RIP, angel. Sadly, Stannis is still Sansa’s best hope, so as much as we’re pissed at him and The Red Woman, we still hope they can reclaim Winterfell. 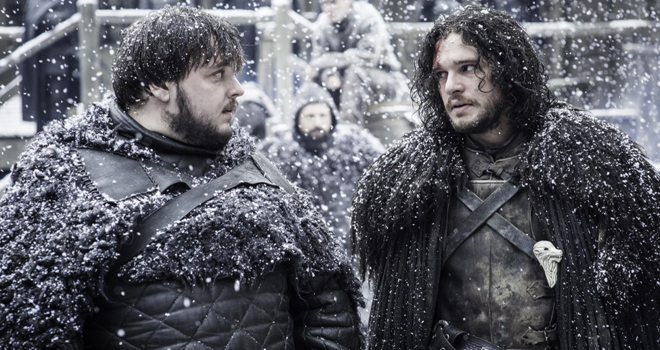 THE WALL
Winter was in full force at The Wall as well. Jon Snow led his group, along with that awesome giant, back to Castle Black. Ser Alliser Thorne, left in charge before, was never a fan of the wildlings at The Wall plan. He stared down at Jon’s group as if to deny entry, so Jon stepped forward and Alliser opened the gates. Jon was visibly relieved! Jon told Sam the Hardhome mission was a failure, but Sam pointed out the people he did save. Their brothers in the Watch were not happy to see wildlings pass the Wall. Olly gave Jon some side-eye too — the wildlings (including Ygritte, killed by Olly this time last year) killed his family. Ser Alliser told Jon he has a good heart; “it’ll get us all killed.” 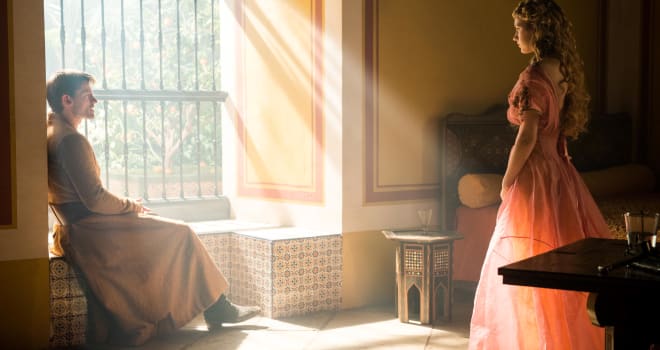 DORNE
Jaime had a meeting with Prince Doran, Myrcella, Trystane, and Ellaria Sand. They wanted to know what the heck Jaime was even doing in Dorne. Jaime said they received a threatening necklace, and Myrcella said that necklace was stolen from her room. Doran knows it was Ellaria. He led a toast to Tommen in front of Jaime, but Ellaria poured her drink out. Doran said, since Tommen wants Myrcella to return to King’s Landing, Myrcella and Tyrstane will both go — and Trystane will take Oberyn’s place on the small council. Interesting. That’s a new twist. *Is* there even a small council at this point or would Trystane basically be taking over the realm? You know Tommen is desperate for friends, so this could be a good power move for Dorne. Trystane got to decide what to do about Bronn. He said he has learned the value of mercy from his father; he’ll set Bronn free on one condition. They went down to the dungeons, where the Sand Snakes were playing a slapping game, and Bronn was taken upstairs. Is Bronn going to stay loyal to “the most beautiful woman in the world”? The one condition for Bronn was apparently getting a punch to the face.

Doran told Ellaria she could swear her allegiance to him or she could die. She kissed his ring. He said he believes in second chances, but not third chances. So she has to be careful. She went to visit Jaime, who was writing a letter, and said she doesn’t disapprove of Jaime and Cersei — and references the incest of the Targaryens. We want who we want. Ellaria said she knows Myrcella and maybe even Jaime were innocent of what happened to Oberyn. Dorne is not that exciting at this point. 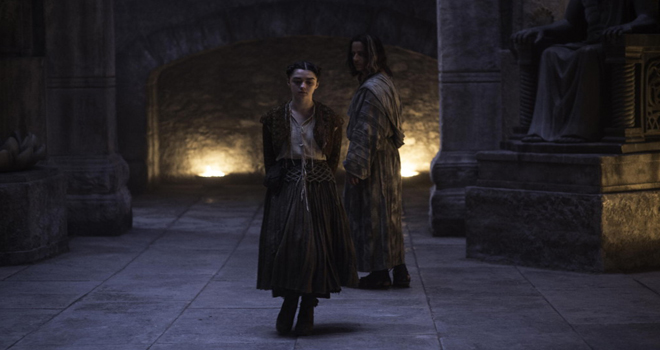 BRAAVOS
Arya wheeled her cart down to the docks again. Someone wanted to pay for her, which is gross but so typical, and she prepared to give the gift of death to The Thin Man. Instead, she kept rolling … because she saw a better target. A better target for Arya Stark, anyway, even though she’s supposed to be Lana. Mace Tyrell showed up to beg with The Iron Bank and Meryn Trant came with him. Meryn is on Arya’s list.

While Mace was haggling with The Iron Bank (and singing?!), Arya made eyes with Meryn. Later, Meryn led his men to a brothel and Arya followed. Apparently Meryn likes them young, like pedophile young. In case he wasn’t disgusting enough already. Some poor servant girl had to put up with him, and he wanted “a fresh one” tomorrow. 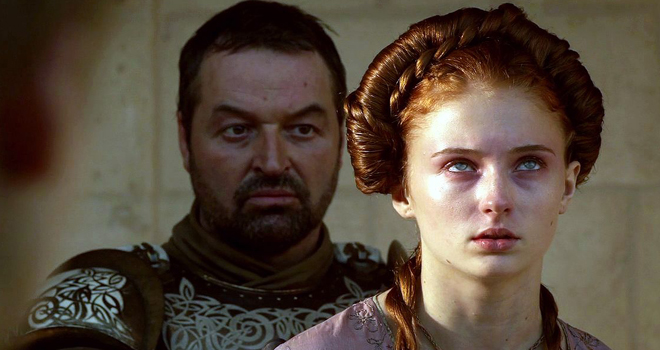 Arya returned to The House of Black and White and said The Thin Man was not hungry that day. Tomorrow then. Did he know she was lying?

MEEREEN
The fighting pits officially opened! Hizdahr was late to sit next to Daenerys Targaryen, saying he had to make sure everything was in order. Hmmm… Dany and Tyrion were not fans of the pits, but Hizdahr defended the tradition. Daario droned on about how much he knew, while not knowing that much. Tyrion to Hizdahr: “My father would’ve liked you.” Worst insult he could give. Jorah showed up in the pit and had a stare down with Dany. Why can’t she just forgive him already? 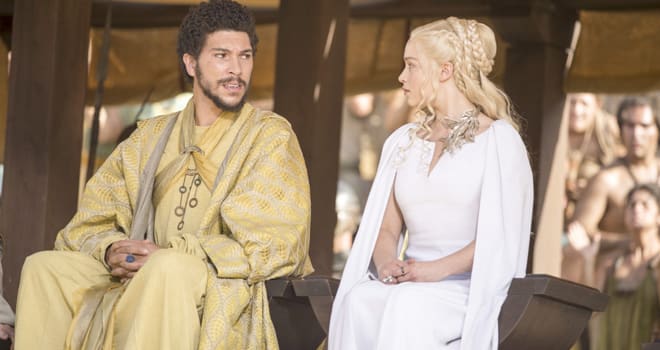 At least you could tell how terrified she was for him during the fight. Tyrion told her she could end it, but Hizdahr said she could not. Jorah was the battle champion, much to the crowd’s dismay … and Jorah sent out a spear to kill a Harpy that was standing behind Dany, ready to attack. He saved her life again! Jorah = Hero. The Sons of the Harpy started slaying in the stands (not a fan of the music at this point) and Daario said to protect the queen. If only Barristan were there, as he was in the book. Hizdahr was going to bring Dany to safety, supposedly, but he was killed by the Harpies. So apparently he’s not with them in this version. Tyrion killed a Harpy and helped Missandei. Jorah and Daario took Dany to safety, and met up with Tyrion and Missandei. A ton of Harpies showed up, boxing them into the center of the ring. Dany became the main event, with spears pointed at her. 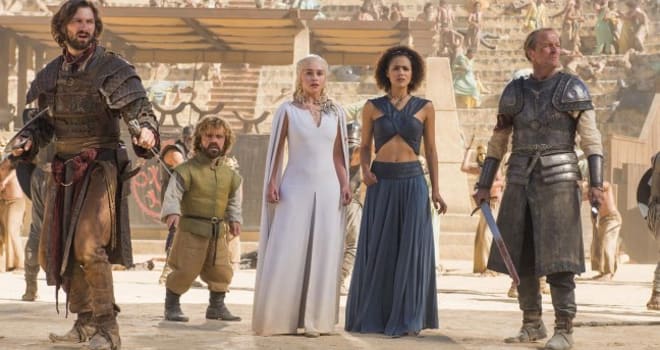 So it didn’t even help to get engaged to one of Meereen’s own, the Harpies were just as determined to kill her. Jorah and Daario slayed some of the Harpies, with others just kind of waiting their turn, action-movie style. Dany and Missandei held hands, as if waiting for death. Dany closed her eyes and (on cue?) Drogon showed up. The winged shadow. Answer to Mama’s prayers. He didn’t seem that big in the ring — thought he’d be bigger — but he started eating Harpies and breathing fire at them. Dany called to him and he came over but only briefly. The Harpies kept putting spears into him, so Dany climbed aboard and said “Now.” And the last shot was of Dany flying away as Tyrion, Jorah, Missandei and Daario watched from the pit. Are they going to be able to get out of there?