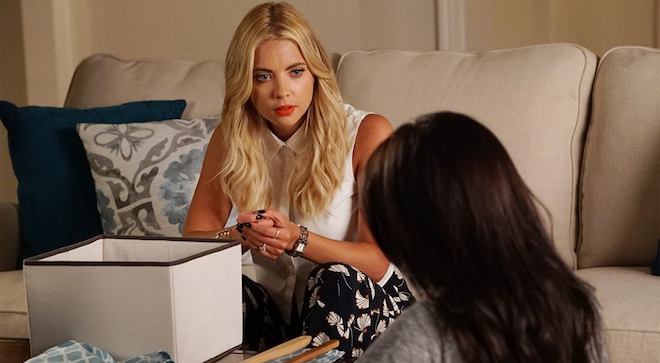 In case you’ve forgotten, “Pretty Little Liars” is currently “five years in the future” on some weird network called FREEFORM that looks a lot like ABC Family, only with slightly cooler font choices. Things that are different? Radley Sanatorium is now a casual hotel and Ezra is a published author (we’ll give you a moment to LOL hysterically). Things that are the same? The police department is terrible, Rosewood is populated by murderers, and the liars are this close to being arrested.

So, why are these ladies trolling around the worst town in America when they could be working like normal adults? Why, because they’re prime suspects in the murder of Cece Drake, of course. Keep reading for the low-down.

Wondering where the liars were on the night Cece Drake was shoved off a bell tower? Turns out Aria left the hotel to visit Ezra’s hilarious 5 o’clock shadow, and according to the Radley Hotel/Sanitarium camera feed, they had a casual chat before Ezra wandered off toward the bell tower feeling all kinds of murderous. We know Ezra is a good (if slightly questionable) guy, but it should be noted that Spencer had just told him about a murder that happened almost exactly like Cece’s. Lesson learned? Literally never talk to Ezra about murder, or he might accidentally-on-purpose kill someone.

In other Ezra-related drama, Aria has a new bookish boyfriend/co-worker named Liam, who gets assigned Ezra’s book when Aria fails to deliver pages. How totally and completely awkward! Also, pretty sure this isn’t how publishing works… Unless it’s normal for low-level employees to be sent to small town Pennsylvania to harass authors. Anyway, Aria does just that, and catches Ezra living in squalor surrounded by pizza boxes, so yes, you might say he’s depressed. Probably because his ex-girlfriend was inexplicably murdered, but who knows.

Please Don’t Panic, But Spencer Has a Crush on Her Friend’s Ex

Everyone, meet Hanna’s hunky boyfriend, Jordan, who is literally nothing like Caleb. This dude has a vague English accent, what appears to be a couple thousand pounds of muscle, and a love for the Hamptons. So yeah, no offense to Caleb “I See Dead People” Rivers, but Hanna traded up.

But don’t feel too bad for Caleb, because – and please try not to weep openly – it looks like Spencer might have feelings for him. It’s like, what are you trying to do to our emotions, “Pretty Little Liars” writers? Honestly, how much heartbreak and confusion can we take?

Again, Please Don’t Panic, But Emily Might Be Dying

Much like everyone else on this show, Emily has a huge secret. Not only is she secretly living in San Diego after flunking out of college, she’s been going to doctor’s appointments in Rosewood because she has a mysterious illness. Um. What is happening. Is Emily OK? Who knows, but she spends her free time weeping openly over her father’s grave, so we’re thinking no.

Also, if you’re wondering whether or not Sara Harvey killed Cece, she isn’t on the suspect list because of an “inability to use her hands.” Ummmm…..K.

“They don’t want to share…” Freestyle DM has unveiled an official trailer for an indie sci-fi survival thriller called Finding Eden, marking the feature directorial debut of filmmaker Rodney Aquino. The film was finished a few...

Hugh Jackman Could Have Starred In Cats, Talks Why He Turned...

Hugh Jackman Could Have Starred In Cats, Talks Why He Turned...