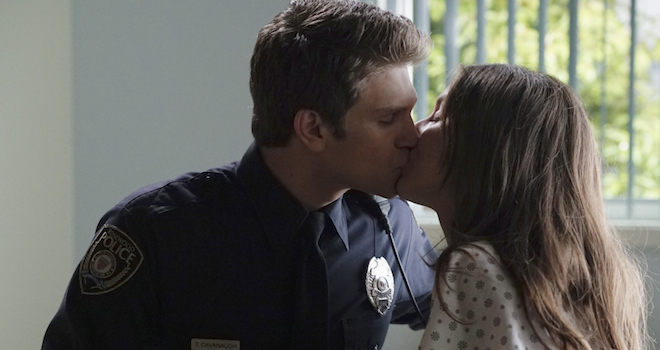 Last week, the ladies of “Pretty Little Liars” were casually locked in a pen by an insane stalker who may or not be Alison DiLaurentis’ long-lost brother, and now they’re suffering from PTSD back in Rosewood (aka HELL ON EARTH). This week, the liars revealed what exactly went on while they were in captivity, and — more importantly — Ali got herself a new love interest. Here’s to hoping he doesn’t turn out to be a serial killer / ritualistic stalker of teenagers.

The Liars Deal With Life Post-Captivity, Go Slightly Insane While Doing So

Now that the liars’ parents are finally clued in to the whole A thing, they’re super concerned about their children — and they have every reason to be. During the first days post-captivity, the liars basically lose their minds: Emily starts shooting guns and wearing her dad’s military uniform (yikes, friend), Aria becomes a compulsive liar, Hanna’s unable to sleep in her bedroom, and Alison finds God (not to be confused with Beyonce). Oh, and we can’t forget about Spencer, who might get re-addicted to anti-anxiety pills any day now.
We also get some flashbacks about what the liars went through while trapped by A. Turns out this maniac “played games with them,” forced them to listen to the sounds of people being tortured, deprived them of water, and was basically a huge jerk.
Oh, and for the Ezra and Aria shippers out there, good news: these two are totally making eyes at each other again. After all, now that Aria’s current stalker is in jail, there’s no reason she shouldn’t fall back into the arms of her former stalker!

Andrew Campbell Is Arrested — But Is He A? Given This Show’s History, Probably Not

The Rosewood police continue to be terrible at everything, and this week they decide that Andrew Campbell is A. The police haul Andrew in after finding a bunch of spy equipment on his property — not to mention a diary entry about how he thinks the liars “represent the feminization of society.” Ummmmm … okay then. Unfortunately, all the evidence against Andrew is circumstantial, so Aria decides it’s probably a good idea to lie about seeing his face in the bunker. Spoiler alert: it’s not a good idea.

Meanwhile, Alison is stressed because she may or may not have a secret brother named Charles DiLaurentis who’s trying to kill her, so she confronts her dad about it. The bad news is that she gets nowhere with her dad, who has to be the creepiest man alive. Major A vibes on that old timer. The good news is that Ali might have a new love interest! Meet Lorenzo, Toby’s new crime-solving partner who — like Ali — attends church. Match made in literal heaven!

Wondering what the deal is with Sarah Harvey, the other girl found in A’s bunker? Turns out she ran away from home two years ago and was promptly kidnapped by A. Running away must be her thing, because it isn’t long before Sarah turns up at Emily’s house and claims that her mom wants nothing to do with her. Guess this foursome is about to become a quintet!

Have burning questions? So do we:

1. Is Andrew A, and if not, why was he spying on the liars?
2. Ummmm, why do the liars “represent the feminization of society”? Explain yourself, Andrew.
3. Who is Charles DiLaurentis, and why is Ali’s dad being so cagey about him?