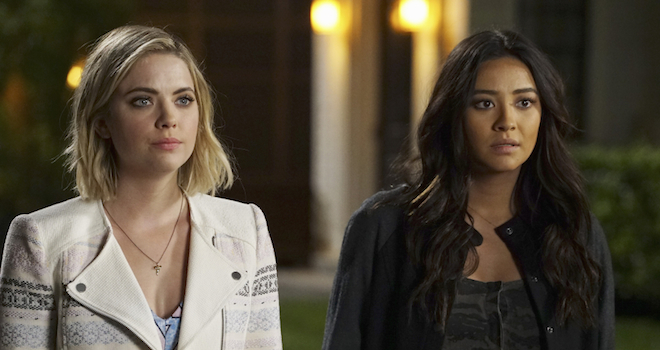 This week on “Pretty Little Liars,” everyone’s favorite teen sleuths were determined to find out whether Aria Montgomery’s ex-boyfriend, Andrew Campbell, is also Charles DiLaurentis. If it sounds confusing, don’t stress: it is. Everything’s basically a huge mess in Rosewood, and we can trust no one — especially Mr. Fitz, a man who, lest you forget, stalked Aria and her friends via camera to “research” his “book” a few years back. Nope, we will never let that go.

Speaking of stalkers, Ezra is super worried about Aria post-kidnapping, so he decides to help a home girl out and encourages her to ditch school so she can research Andrew (you’d think as a former teacher he’d care more about her grades, but whatever). Thanks to Ezra’s #StalkerSkills, he easily finds out that Andrew was adopted — which mean he could be a DiLaurentis in disguise!

Meanwhile, Spencer is convinced that Jason knows who Charles is, and she’s totally right — kinda. Sure, Jason knew a “Charlie” when he was little, but Charlie happened to be Jason’s “imaginary friend” who mysteriously disappeared one day….

Remember how Alison’s found God and whatnot (try not to eye-roll)? Well, now she’s making BFFs with her church buddies, including Lorenzo, Rosewood’s newest hilariously young cop. This dude (who will probably turn out to be a serial killer, as most men in Rosewood are) wants Ali to organize a girls soccer program for the church, but Toby is totally harshing their flirtation buzz because he doesn’t want Ali corrupting his partner. It’s like, stop mainsplaining to this entire town, Kindergarten Cop. Leave #Alenzo alone — poor Ali needs something good in her life!

In case you’ve forgotten, A also kidnapped a girl named Sara two years ago, and there’s definitely something up with her. Sure, Sara has a bad home life and lived in a bunker for two years, but her propensity toward lurking in shadows and being generally strange is iffy to say the least. Watch out for this one, she has “might be crazy” written all over her!

That being said, Sara was a target of A’s this week when he sent the liars footage of her sleeping. Turns out A didn’t want the liars talking about their time in therapy to Rosewood’s resident therapist, Dr. Sullivan (how does she still have a job?), and he’s now in the habit of threatening to kill people if they don’t listen to him. Correction: he’s always been in that habit.

In other news, Andrew is released from jail because there’s basically no case against him, and when Aria tries to apologize, he claims he was devoted to finding her for three solid weeks while she was kidnapped. Well, this is awkward.

The silver-lining is that Aria finds evidence of Charles’ existence hidden in the DiLaurentis’ button jar, and when Ali and Jason confront their dad we see him mouth “your brother” through the window. This would be cause for celebration, if Spencer didn’t go home and immediately down a few pills. Looks like this goodie-two-shoes is addicted again!

And now, some burning questions.

1. If Charles is Ali and Jason’s long-lost brother, what happened to him? Was he given up for adoption, or did he die only to come back to life as a zombie stalker>

2. Andrew Campbell is out of jail, but we’re not entirely convinced he’s innocent — despite the fact that he has a few alibis up his sleeve. Why was Andrew tapping phones and tailing the liars?

3. What role will Sara play this season? She was living with A for a long time — is it possible that she’s working for him?