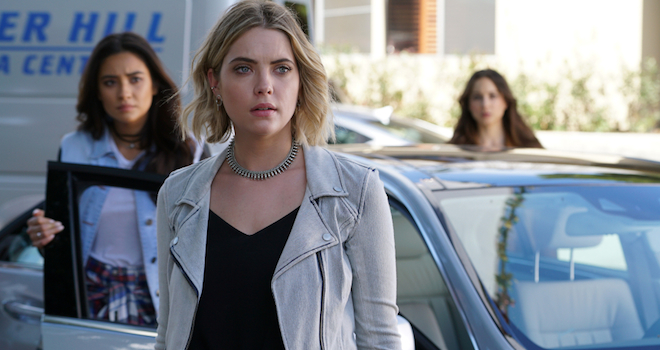 This just in: Jason DiLaurentis grew up with an “imaginary” friend named Charles, and now he might be a real-life murderer who specializes in harassing teenagers. In other words, Jason’s childhood is officially ruined!

This week on “Pretty Little Liars,” the girls tried to get to the bottom of Charles’ real identity, all while dealing with the typical problems every teenager faces. You know, like dating middle-aged coffee shop owners who used to stalk you / trying to recover from that time you were taken hostage for a month. The usual.

You Guessed It: Charles Is Ali’s Brother
Last week, Alison and Jason asked their dad point-blank who Charles was, and his completely insane answer? Charles is Ali’s older brother who was institutionalized at Radley Sanatorium thanks to the fact that he tried to kill Baby Ali. #ItsCasual
Word on the street is that Charles killed himself at 16, but the liars are convinced that this dude is still alive and well, so they head to a data center to find his patient files. Unfortunately, they don’t discover anything about Charles’ alleged death, but they do find out that his Aunt Carol was a frequent visitor to Radley. This, combined with the fact that Jason remembers his mom hiding someone at Carol’s house, inspires the liars to pay the ramshackle pad a visit. Their discovery? Charles’ grave. Hmmm, if this guy is really RIP status, why is A impersonating him?
STOP EVERYTHING: SPENCER IS ADDICTED TO POT BROWNIES
As we all know, Spencer’s addicted to pills. But now that she’s run dry, she’s all about living #ThatPotBrownieLyfe thanks to Ezra’s new barista, Sabrina. This girl bakes Spencer a batch of cookies to help her deal with some anxiety problems (she’s worried she killed someone while in captivity, sigh), which gives Ezra a great opportunity to mansplain the dangers of drugs. Clearly, he did well in D.A.R.E.
In other news, Hanna feels like Caleb’s being too over-protective (uhm, more like he’s the only person in this town who cares that she was abducted), and she asks him to give her space. If the “PLL” powers that be break up these two, Tuesday nights will be dead to us.
And speaking of dead, do you ever wonder where Aria’s parents are? Because aside from the occasional appearance from her mom who could not be more zoned out, Aria’s basically living alone in an attic. That said, Aria’s dad, Byron, does make a rare appearance this week, because he’s finally realized that his daughter is a victim of attempted murder. Father of the year!
Sara Is Creepy. That is All.

Wondering what Emily’s new feral roommate is up to? Sara and her questionable haircut spend most of the episode skulking around Rosewood creeping everyone out, but she and Emily share a tender moment swimming in a public pool. How sweet! Actually, never mind, we definitely think she’s evil and could possibly be an A Squad henchman. (By the way, A has tracking devices on all the liars right now, and he’s watching their every move.)

Burning Questions…
1. Is Charles alive or dead? It’s so confusing, we just can’t.
2. Is Spencer going to become a drug addict, and if so, are we going to get an “I’m so excited, I’m so excited, I’m so scared” moment?
3. What’s the deal with Sara — is she working for Charles?
4. Ezra’s barely been in the show and his relationship with Aria is almost non-existent. Are the producers getting ready to write him off?