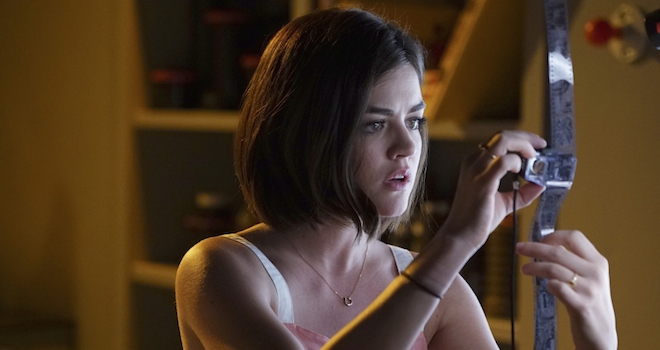 Lots of things happened during this week’s “Pretty Little Liars,” but the most important moment was definitely Spencer having a dream about Zombie Maddie Ziegler dancing around an asylum. Clearly she’s been watching way too many Sia music videos / eating way too many pot brownies. Read the recap to find out more must-know moments from the episode — including A’s surprising gender!

Mona’s Back In Town, Is Kinda-Sorta Evil Again

Good news everyone: Mona Vanderwall is back in Rosewood after taking some time to “do her” following #ThatMomentWhen she get locked in a cell by the town’s resident stalker. As expected, FKA A (that’s Formerly Known As A, for all you people who have forgotten that Mona was, in fact, A) is a fragile mess, but there’s more to this story than meets the eye.

Turns out Mona’s working for her friend, Lesli Stone, who the liars find out was at Bradley Sanitarium at the same time as Charles DiLaurentis. You know what that means: she might be A. Much like everyone else on this show.

Also, if you’re wondering how Hanna and Caleb are doing in their relationship, they aren’t having sex — at least that’s the impression we got from ABC Family’s coded PG language. Sob, if these two break up hot off the heels of Ben Affleck and Jennifer Garner’s split, love will truly be dead.

Emily Gets A Tattoo, Everyone Side-Eyes

Not to hate on Sara, but we still think she’s hiding something. That being said, she and Emily got super chummy this week: not only did Em help Sara ditch her mom for good (she’s legally emancipated!), they get friendship tattoos (NOPE), and Emily tells her new BFF all about A.

But more on these two later, it’s time to talk about #Alenzo. Remember when we predicted that Alison was going to start dating Lorenzo, the newest underage member of Rosewood’s police force? Well that’s totally happening. Alison decides to lean on Lorenzo out of sheer boredom, and after agreeing to teach a soccer camp with him (yeah, that seems like an awesome idea), they make out. It would have been cute if Ali’s dad wasn’t watching. Shudder.

Spencer’s Living That Pot Brownie Life, Maddie Ziegler Might Be A

Stop everything: Spencer is still addicted to pot brownies. Unfortunately, “the herb” (that’s what cool people call it, right?) is making her super intense — so much so that Hanna thinks she’s addicted to sex. (edit note: AHAAHAHAHAH) The good news is that Spencer joins a support group, where she meets up with her old sober coach, Dean. Watch out, Toby, you’re about to be replaced.

In other news, Aria’s new photo crush is still around, and this week they visit a junkyard for #inspiration. However, A tags along as a creepy third wheel, giving Aria a chance to do a little investigating. Turns out Clarke even snaps a pic of our favorite hoodie-clad killer, and when Aria checks out his negatives she realizes that A is — wait for it — a girl. Maddie Ziegler, is that you?

1. Is Ezra still on this show? Was he written off because the writers finally realized he’s way too old for Aria?
2. What’s the deal with Maddie Ziegler — is she going to be a real character, or simply a figment of Spencer’s imagination?
3. Will Spencer break things off with Toby for her sober coach?
4. Is Lesli A? Because she doesn’t look tall enough….

Why The Mortal Kombat Reboot Is ‘Definitely Not’ G...

Did you added your own Google API key? Look at the help.

Check in YouTube if the id movieclipsTRAILERS belongs to a username. Check the FAQ of the plugin or send error messages to support.

Why The Mortal Kombat Reboot Is ‘Definitely Not’ Going To Be...

Looks like the Mortal Kombat reboot won’t have a PG-13 rating after all. Source link

Before His Rumored Sex Message Scandal, Did Armie Hammer Hav...

The rumor mill has been busy this week with Armie Hammer and Rebecca. Source link

Before His Rumored Sex Message Scandal, Did Armie Hammer Hav...