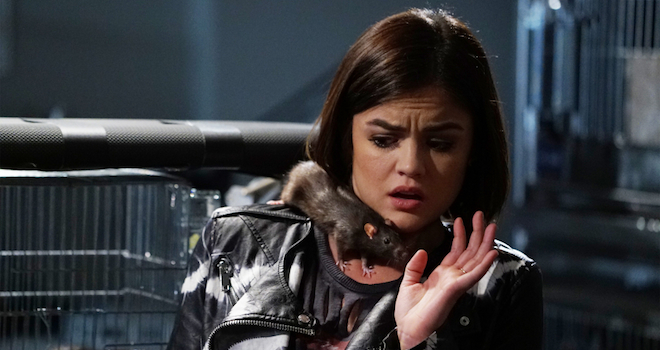 Last week on “Pretty Little Liars,” the girls decided that Lesli Stone (aka Mona Vanderwaal’s creepy friend) was A, because apparently some blurry photo Aria took kinda-sorta looks like her. Naturally, the liars spent this week obsessing over Lesli instead of just going to the police — though, can you blame them? The Rosewood Police Department is basically run by teenagers, some of whom used to be stalkers themselves (that’s right, Toby, we haven’t forgotten the time you joined the A Squad for “research.”).
Read our recap for a run-down of what happened this week on everyone’s favorite never-ending teen thriller — and don’t forget: A will be unmasked in just three episodes.
Charles Is Alive, The Liars Continue To Be Wrong About Everything
So, the liars think Leslie is A, but as usual they are terrible at everything and have no idea what they’re talking about (bless their hearts). Their brilliant plan this week? To steal Lesli’s car and then break into her lab — which happens to be filled with feral raccoons. #ItsCasual
While in Lesli’s lab / raccoon breeding ground, the girls discover that they’ve had tracking devices put in their necks, and to make matters worse, Hanna decides to release Lesli’s rodents. They promptly attack her, but hey — at least PETA is happy.
At this point, Mona shows up and is like “SIDE-EYES” (in so many words), before explaining that while Lesli is crazy, she’s not a serial stalker. According to Mona, Charles DiLaurentis is the man they’re looking for, and he faked his own death — a fact that’s seemingly confirmed when we see Mr. DiLaurentis dig up his grave after getting a card from Charles in the mail.
Ezra Has A New Lady Friend and Aria Ain’t Happy
Good news, everyone! Despite her addiction to #WEED, Spencer has been made valedictorian — but she’s super stressed about giving a speech. Spence leans on her sober coach, Dean, but this dude has the hots for her, and even goes so far as to declare his passion before storming off in a fit of angst. Clearly, Dean needs to chill out with some of Spencer’s baked goods.
In other, relationship news, it looks like Ezra is officially moving on from Aria. Despite swinging by her house and announcing that he has a photo of her above his desk (um, ok), Ezra gets cozy with Nicole — Emily’s friend from abroad. Nicole’s in town to chat with Em about going on a charity trip, but when she says no, Nicole decides to spend her time flirting with Ezra. Annnnnd cut to Aria watching them despondently from a window. We feel for her, but hey — at least Ezra’s dating someone who’s (maybe) older than 16.
Hanna and Caleb Kiss and Makeup / Makeout
We’re feeling really vulnerable right now because it looks like Hanna and Caleb are about to break up due to Caleb’s next-level clinginess. It’s like, DAMNIT HANNAH, don’t you realize that you’re dating an angel? The good news is that Caleb kind of fixes the tense situation by showing up at Hanna’s house for some action. That’s a great way to solve relationship problems! We’re learning so many lessons tonight!
Oh, and speaking of relationships, Aria’s photographer love interest, Clarke, is still around, and they take yet another trip to the abandoned fun house together. This time, Aria finds a terrifying doll in her likeness, because, as we all know, A crafts in his free-time.
#SEMILY ALERT
Today in hilarious news, Sara is working for Caleb as part of his “tech” business (LOLing forever) — but before you start thinking there’s a potential love connection here, it looks like Sara and Emily are OTP status. At least that’s the impression we got when Emily sensually rubbed anti-infection cream on Sara’s back and then madeout with her.
Also, shout out to “Pretty Little Liars” for taking the time to explain #Kimye to Sara. This girl has been underground for years — it goes without saying that America’s royal family is the first thing she should get acquainted with upon her return to real life!
Burning Questions
1. Wait so Charles is alive now? Make up your minds, “PLL” writers!
2. If Lesli isn’t A, who is she?
3. Does Spencer have feelings for her sober coach? What about Toby?!
4. Is there a reason the liars aren’t going to the doctor to get their chips removed, or…?
5. Who is A? Wait, never mind, there’s no way the show will ever answer this one.