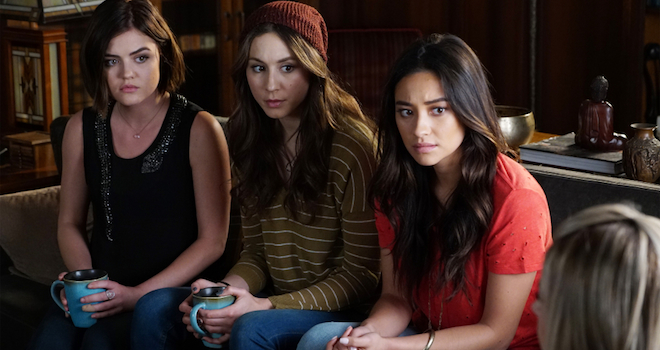 You know how Aria Montgomery’s secretly a genius photographer who spends all day snapping pictures of dolls and whatnot? Well, this week on “Pretty Little Liars,” the art world was like “ONLY ARIA CAN SAVE US!” and she got herself a gallery exhibition. Unfortunately, A thought this would be a great time to be a total photography buzz kill and ruined the entire event.
Other things that happened this week include a new reveal about A’s right hand man, and some Ezria flirting that will have shippers shaking and crying. Also of note, Toby Cavanaugh was absent — presumably due to the fact that he recently binge-ate a bunch of pot gummy bears and is still high.
Everyone Panic, Senior Prom Might Be Cancelled
Last week, the liars got themselves held up at gun point by the Rosewood PD thanks to their terrible decision to go after Charles DiLaurentis, and now their lives are basically ruined. Not only does the whole town know about Charles, Rosewood High might not let the liars go to prom for their own protection. Sounds reasonable to be honest — especially given that there’s a known murderer roaming the streets. Actually, maybe cancel the entire event?! Just a thought.
Aria Asks Ezra To Prom, Makes Everyone Uncomfortable
Guys, so much is going on in Aria’s life. Not only is she about to be a world famous Doll Photographer (that’s definitely a genre), she finally has a parental figure! Yep, Aria’s mom is back from the “PLL” backlots, and doesn’t want Aria attending her gallery opening. Um, where were you when Aria was wandering around a decrepit fun-house last week, Ella?
Anyway, Aria convinces Detective Tanner to bring police protection to the gallery, but this accomplishes basically nothing because A switches all of Aria’s doll photos to images of the liars naked in a morgue. Womp.
The good news is that Aria has Ezra to lean on (even though he seems interested in Emily’s friend Nicole), and she asks him to prom. We repeat: she asks her professor, a former teacher at Rosewood High, to prom. No comment.
Ali Breaks Into Rosewood Police Headquarters
So, Ali has the worst life ever. It’s like, she’s finally out of prison, and now she might have a long lost brother who’s been ritualistically stalking her for the past few years. Thankfully, Ali has her hunky policeman boyfriend, Lorenzo, to lean on — but she puts their relationship in jeapordy when she steals his ID and breaks into the Rosewood Police Department. Five seconds later she’s caught red-handed by Tanner, who informs her that the police plan to kill Charles on site when they catch him.
Ali seems sad. Has she forgotten about the fact that Charles most definitely tried to murder her best friends, or?
Red Coat Is Back!
In case you’ve forgotten, Hanna is an unexpected super-genius — but she can only go to school if she cashes a scholarship check with ties to Charles DiLaurentis. Hanna decides to visit the offices of Reese Matthews to find out more, as he issued the scholarship and definitely might be Charles. We’re so worried.
Either way, all evidence points to the fact that Reese is creepy. Not only does he look exactly like Jason DiLaurentis’ long lost brother, he shows up at Aria’s gallery and the liars follow him to an abandoned doll factory where he meets — wait for it — Aria’s buddy, Clarke. Do we have an A Squad on our hands? This is the literal opposite of #SquadGoals.

In other news, Red Coat is back and working with A, so yay, there’s another psycho in the tiny town or Rosewood!

And now, some burning questions….
1. Is Clarke really working for A, and more importantly, is Reese secretly Charles DiLaurentis? This seems too random to be worthy, so hopefully the writers have something more exciting in the works.
2. Will the liars make it to prom? And — brace yourselves — will Ezra do the unthinkable and actually go as Aria’s date?
3. Sara wasn’t around this week and we can’t help but think she might be working for A…should we trust her?