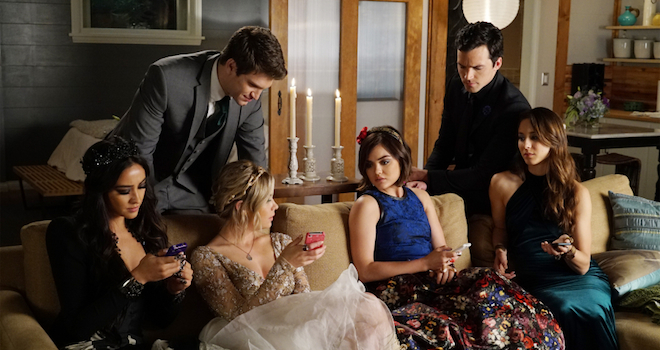 Good news, everyone: despite the fact that there is a teen-killing murderer at large, Rosewood High is still going ahead with its prom — and the little liars are getting in on the action. For some reason, the liars think it’s a great idea to attend their school dance (note: it’s not), and they head to the event only to get — you guessed it — attacked by A. It’s like, have they learned nothing from starring in the previous four seasons of this show?

Keep reading our “Pretty Little Liars” recap to find out what secrets the girls unravel as they attend what has to be the most whack prom that’s ever been thrown.

The liars are banned from prom for obvious reasons, but don’t worry — Spencer’s mom offers to throw them a mock dance in her barn. Because that sounds fun!!!! Fortunately, Charles lures Ali to the actual dance, which gives the liars an excuse to follow her with their respective boyfriends. And no, they don’t tell the police — which actually isn’t a big deal because apparently Clarke’s been an undercover cop this entire time. Who knew?

But before we talk more about this hilarious revelation (and the fact that the Rosewood Police Department is literally incapable of hiring anyone over the age of 19), let’s discuss the liars’ respective dating lives.

First up, Aria. Despite our hopes and prayers, this burgeoning photographer is going to prom with Ezra — aka her former stalker / teacher. But even more alarming, she peeps Ezra’s phone and finds out that he’s booked a flight to Thailand and is joining Habitat for Humanity (LOLing forever). Hopefully he’ll stay away from high schoolers while there.

Meanwhile, Spencer goes to prom Toby (who’s forgiven her for that one time he got high on gummy bears), while Hanna goes with Caleb, who — wait for it — has just been recruited as a hacker in New York City. No words. Oh, and if you’re wondering about Emily, she opts to take A’s original victim, Sara, as her date — despite the fact that she’s clearly evil.

The Liars’ Moms Get Wasted, Remain Terrible Parents
So, what are the liars’ parents up to while their daughters are running around prom? Getting drunk. Yep, the absent mothers of Rosewood band together for a night of wine guzzling, fail to notice their children sneak out, and then break into Ali’s house in the hopes of accusing her dad of murder. Good, awkward times.

Unfortunately, Kenneth DiLaurentis is nowhere to be found, and instead the Pretty Middle Aged Liars come face-to-face with Reese Matthews, who may or may not be Charles. You’d think at this point they’d head outside and talk to the police, but instead they get themselves locked in Ali’s basement. Yikes.

Meanwhile at Prom….
So, not only does Secret Agent Clarke totally fail to protect Ali due to the fact that Ezra and Caleb block him (thanks for nothing, boys), Ali promptly gets herself kidnapped by A while navigating her high school dance. Sure, the liars run around trying to find her with their group of policeman BFFs, but they come up short and Ali ends up stuck in a tunnel with A. But the best part? A takes off his hoodie and Ali’s reaction is pure shock and horror. Looks like she’s just seen a familiar face….
Burning Questions:
1. If A’s at prom, who locked the liars’ moms in the DiLaurentis basement?
2. Is Reese Matthews Charles DiLaurentis? And more importantly, is Charles
DiLaurentis A?
3. Mona was noticeably absent this week. Should we be on A alert?
4. Ezra disappeared at the end of the episode. Less of a question and more of a just sayin’.