'DC's Legends of Tomorrow': TV Review
The Academy May Change the Oscar Nomination Process Next Week 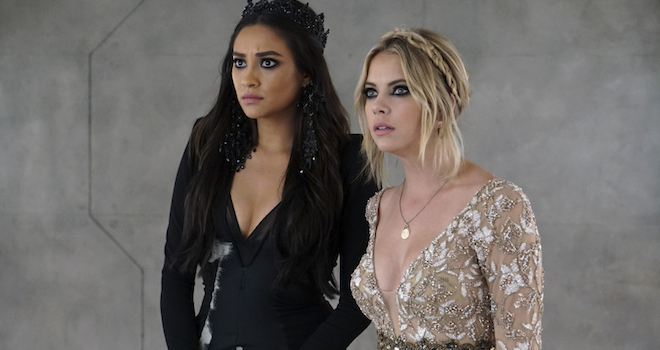 Your entire life has been leading up to this moment: the moment you finally find out who A is on “Pretty Little Liars.” You’ll have to read the recap below to discover the truth about everyone’s favorite stalker (not to be confused with Ezra Fitz), but all you really need to know is that our feelings are best summarized by this: “DHSJAKDHSJAKHDSJKAHDSJAK.”
Basically, this A reveal was even huger than when Toby got high on gummy bears and was tripping on the streets of Rosewood.
And A Is…
Last week’s episode ended with Ali coming face-to-face with Charles DiLaurentis, and this week she wakes up in a creepy bunker next to her comatose dad and brother. LOL, A, keep doing you!
Meanwhile, the little liars meet up with Mona at prom, who informs them Charles has his own cellular network located at the Carrisimi Group. The liars head to a the company headquarters and quickly discover a live feed of Ali talking to…wait for it…Cece Drake. BOOM, bet you didn’t see that coming! Unless you did, in which case congratulations.
A’s Backstory as a Transgender Child Is Revealed
So, turns out Cece (aka Charles) was carted off to an asylum because her dad couldn’t accept her for being transgender. The good news is that when Cece turned twelve, Ali’s mom bought her a yellow dress and began embracing her identity, which kind of makes up for the whole “we’re the worst parents of all time” thing. Sadly, everything went south when Cece met fellow sanitarium inmate, Bethany Young.
Bethany pretended to be Cece’s friend, but was secretly murderous and transphobic. In fact, she killed Toby’s mom on the roof of Radley Sanitarium, and then blamed the incident on Cece. Sure, she was innocent, but Mrs. DiLaurentis paid off Detective Wilden to rule Mrs. Cavanaugh’s death a suicide just in case.
After spending a few years in a cell, Cece (who was called Charlotte at the time), was granted permission to attend college, where she wasted no time calling in a bomb threat and booking it to Rosewood. So, what did she get up to while in town? Why, she casually started dating her brother, Jason DiLaurentis, of course! *We assume you are feeling vaguely ill right now due to #PLLincest, so please take a moment to collect yourself.
At this point, Bethany decided she should kill Jessica DiLaurentis as payback for dating her dad (girl had issues), so she wandered over to Rosewood and tried to off her. The problem? Cece killed her first! Only she didn’t, because she was too busy accidentally killing Ali. Apparently all blondes in Rosewood look the same — it could happen to anyone, ok? Cece ended up burying Ali’s body in a grave with her mom’s help, but little did they know she was actually alive. Dun, dun, duuuuun!
Who Is Red Coat?
So, who killed Bethany? Apparently, Mona did — but only because she was actually trying to kill Ali. Yep, she also has a lot of confusion when it comes to blonde hair + murder, and who can blame her? Anyway, no one seems too upset that Mona’s a killer, so let’s move on to Red Coat.
Turns out Cece assumed A’s identity after talking to a drugged-up Mona in Radley Sanitarium, and was further inspired by Sara Harvey (aka Red Coat). Cece and Sara teamed up to take the liars down, and their motive? Getting the girls back for being mean to Ali in high school! (And also just general insanity.)
Oh, and in other news — Sara killed Detective Wilden. So yes, Emily has the worst taste in girlfriends ever.
Five Years Into the Future
After listening to A’s backstory over a live feed, the liars rush to stop Sara from blowing them to smithereens with a homemade bomb. The good news is that they successfully prevent her from killing everyone (and Em punches her in the face), but the bad news is that poor A can’t handle being caught and ends up turning herself in after a suicide attempt. Where will the show go from here, you ask? Oh, just five years into the future. It’s casual.
Apparently, the girls graduate college and Alison starts working as a teacher with the faux name Mrs. Rollins, which sounds fabulous, but actually isn’t. You see, things get intense real fast when the liars storm into Ali’s classroom and announce that someone’s after her. The question on everyone’s minds? Who?!
Also, here’s to hoping that the PLL’s fleet of drunk moms were let out of the basement.